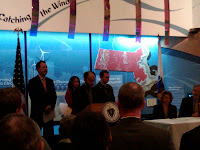 The Commonwealth of Massachusetts and Nissan entered into an agreement this afternoon to advance zero-emission mobility throughout Mass. by promoting the development of an electric-vehicle charging network, as well as the necessary legislation to allow for adoption of such a network. The agreement was signed today at the Museum of Science, which hosted the event and featured the Nissan Leaf, the all-electric vehicle that hits the road this December. It was a promising sign for Massachusetts which, as Energy and Environment Affairs Secretary Ian Bowles mentioned, is competing hard for the top spot among environmentally responsible states in the country.

On top of the cool t-shirts Nissan was handing out, it was great to see some local companies get props for the work they’re doing to advance electric transportation – including C 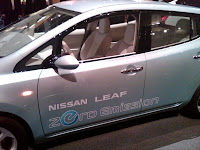 HEN PR client and lithium-ion battery maker Boston-Power, who got a nice shout out from Secretary Bowles.

The car, as you can see, looks pretty sharp and I wouldn’t be surprised to see them zigging and zagging across the state’s highways by early next year.