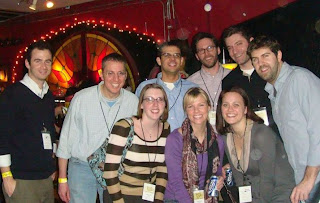 In my experience, most tech networking events have included a lot of business card passing, a few awkward conversations, one person commenting on the “legs” of the red wine and the voice of Chris Martin playing softly through overhead speakers. If you substitute the business card passing and conversation with yelling and nodding while pretending to hear the person next to you; change the wine to Bud Light cans; and exchange Coldplay for live rock music, you’d get Xconomy’s networking event, the “Battle of the Bands 2.”

Five bands represented New England-based tech companies and were competing at the Middle East in Cambridge for the grand prize of $1,050 in free studio recording time and engineering help. Voting was done via text and in true nerd style; patrons were able to IM live messages, which were posted on projector screens throughout the event. The Dirty Truckers – which included CHEN PR client, Sophos – were obviously our favorite, and ended up being the big winners of the night!

Maybe it was the music, maybe it was the company. It may have even been the cans. At any rate, Xconomy put on a great show and gave us a refreshing twist on the average networking event. We all had a great time (even our non-CHEN PR friends, Nikki and Joe made an appearance) and at the end of the night, when we were the only people left and the bouncer came over to ask our group if we were staying because we worked there, I’m not going to lie. I almost said yes.