Greenspan on the Economy, Energy and SarbOx 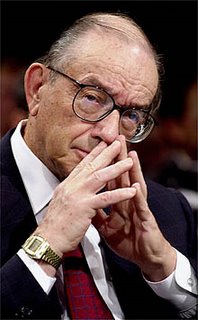 When Alan Greenspan talks, people listen — around 800 to 900 of them, at Mass TLC’s “A Conversation with Dr. Alan Greenspan,” held last night in Boston. Paul Deninger, Chairman of Jefferies Broadview technology investment banking group, played the role of inquisitor. Questions were submitted by email in advance.

Trivia for the day? Greenspan studied clarinet at Juilliard and is an accomplished sax player.

PD: If you had a niece or nephew who was graduating now, what would you steer them toward? What sectors are growing?

AG: I’d tell them to own a hedge fund, or to pass a tin cup and start a private equity fund.

He went on to note that the area of intellectual property rights would be one to watch, saying, “The vast majority of the GDP is in ideas. When you get into the area of intellectual property rights, there are going to be some very significant issues. You cannot patent abstract ideas. What if Newton had patented calculus? What is open source, and what is not?”

Some other notable responses:

PD: What’s your current assessment of the economy?

AG: The economy is slowing down from its rapid pace in the first half of the year, so we have built-up inventories. But there’s no evidence of a real falloff in housing. There’s no underlying deterioration of the economy. The decline in gas prices is a very important influence on consumer spending. Globalization is a critical determinant of the economy. Right now, we’re seeing signs of modest pickup in Europe and Asia is booming. The real danger is events you can’t forecast, like 9/11 or Katrina.

(He expanded on the Chinese market.) China has been moving to capitalism without ever explicitly saying so. In November of last year, they hosted an international golf tournament with all the big names. No one seemed to think it was all that unusual. But golf is the quintessentially capitalist game.

PD: What about offshoring, outsourcing – Is that a good or bad thing for America?

AG: You have to ask: How have we benefited from this dramatic opening of the economy, via globalization? On average, salaries have benefited. There’s a premium on conceptual value added – that’s what we deliver today. The value of intellectual skills is rising, the value of physical labor is being devalued.

But our educational system is in deep trouble. There’s an annual Boston College survey of math and science students. Every year, our 4th grade students are excelling as compared to the rest of the world. By 12th grade, they’re at the bottom of the heap. Something is going terribly wrong in between. It’s not the kids, because in 4th grade, they’re fine. It’s the system.

So assuming you don’t get this solved, we’ve got to loosen up immigration for high tech. Someone who gets a PhD here is very unlikely to become a terrorist.

PD: Should we worry about China?

The Chinese government’s best hope of maintaining power is to maintain the standard of living. The chances of militarism on the part of China have diminished. They are down the road of pursuing material well being.

PD: When do we lose our global hegemony?

AG: It depends on how you measure that. If you are talking about a nation’s GDP, of course China will surpass us at some point. But I don’t see anyone approaching us on per capital GDP.

At some point, we have to let creative destruction take over. It’s the mechanism by which our standard of living rises. We have to let our obsolescent industries fade, no matter their names. So when people say to me, “We’re losing jobs to China,” I respond: I hope so. We’re losing jobs in obsolescent industries. Our greatest skills are where we’re being pursued by the rest of the world – in our financial systems.

PD: What about the number of IPOs we’ve seen in recent years. Have we gone too far with SarbOx?

AG: eWeek covers his answer but Stan skipped his funny aside: “The only person who thinks this is helping is the head of the London Stock Exchange.”

PD: What about alternative energy? We’re seeing lots of investment there.

AG: Up until recently, the activity was interesting but negligible. The answer is not corn ethanol. It’s a political product, not a real one. But cellulosic ethanol is intriguing. What happens if you can make fuel from something like switchgrass? Now we have an operating plant in Idaho. We’ve done an amazing job of boosting crop yields. If we can boost the appropriate crop yields, we could replace 9 of the 11 million barrels we use daily. That would be significant.

Disclaimer: This post was not based on a transcription, but rather scrawled notes, so anything that sounds odd is no doubt my error, rather than the esteemed messieurs Greenspan and Deninger.