Simmons Leadership Conference – We Can Change the World…

Uncategorized Posted May 3, 2009 by metropolis 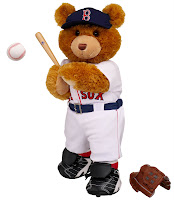 …one teddy bear hug at at time.” Maxine Clark

“Retailing is entertainment, and the store is a stage. When the customer has fun, they spend money.”
Stanley Goodman, former chairman of the May Company

There’s a reason why Clark and her company have won of string of awards for innovation and leadership. She talks the talk eloquently, but she also walks the walk.

It’s hard to not love a leader who has built a company on phrases like, “It’s not just about building revenue, it’s about building empires of character and value.” And she’s so genuine that you know it’s totally sincere. She’s not posturing.

Through its foundation, Build-a-Bear has donated more than $20 million to various kids’ nonprofits. The company also has launched wonderful campaigns such as its Huggable Heroes, which is in its sixth year. This project recognizes kids who volunteer their time in a broad range of community service projects – in underserved schools, hospitals, nursing homes and disadvantaged neighborhoods. The nomination process (which is now closed) will culminate in the selection of ten noteworthy young people from the U.S. and two from Canada. Each will receive a prize worth $10,000 ($7,500 in scholarship funds and $2,500 from the Build-A-Bear Workshop Foundation to be donated to the charity of their choice).

Clark has had a long career in retailing, starting out at May and Company. In her third week on the job, she heard the chairman, Stanley Goodman, speak (see above) and she knew she’d found her professional calling. She held a series of increasingly successful positions, culminating in CEO of Payless Shoes. For a long time, she loved the job so much she felt she should be paying her employer, but eventually, she felt she was earning that paycheck. At that point, she knew it was time to leave.

She had a light bulb moment when shopping with a 10-year-old friend. It was 12 years ago, at the height of the Beanie Baby craze, and her young friend said, “These are so easy; we could make these.”

Build-a-Bear started with one store in St. Louis (still the headquarters) and now has 400 stores worldwide, having sold 75 million bears to date ($470 million in revenues). The company is the tenth largest toy retailer in the U.S.

Clark set out to build a business with a heart. That sounds like a catchphrase, but in this case, she meant it literally. When kids build a bear in one of her stores, they get to pick out a heart for the bear when stuffing it. During the “heart ceremony,” kids make a wish on the heart, and the wish stays with the bear for the rest of its life. You can touch the heart to your left or right elbow to make the bear left or right handed. Touch the bear to your head, and it will be smarter than the average bear.

It’s little wonder that one of Clark’s favorite lines is this one from Lauren Bacall: “Imagination is the highest kite you can fly.”

It’s tough to capture Clark in a short post, so I’ll let Clark’s words speak for her:

Words to live by.