At Mass TLC’s recent event entitled “Video Game Gold: The Prosperous Gaming Industry In Massachusetts,” a panel comprised of the minds behind hits like Rock Band, Lord Of The Rings Online and GSN’s online gaming arm assembled to encourage and inform any and all who might be interested in the state of Massachusetts’ gaming landscape.

While the conversation jumped around from subscription vs ad based business models to the need for more original intellectual property in the gaming world, two points stuck out as particularly noteworthy.

The first originated from a statement made by Harmonix VP of Biz Dev Florian Hunziker who claimed that the video game industry was “counter-recessional.” Reason being that if people are putting a halt on spending, there is a good chance that the first thing to go would be activities outside of the house (eating out, vacations, shopping) forcing people to entertain themselves at home. Clearly video games fit this bill. Following this statement, the four panelists who hailed from game development companies (Turbine, Harmonix, 38 Studios and Worldwinner) all pointed to the fact that amidst economic tragedy, they were still hiring and they were still growing revenue.

While Hunziker was quick to mention that despite this growth and ability to continue hiring, big gaming stocks (EA, Activision etc…) were seeing significant drops in value, indicating that perhaps the pain from the recession was simply over the next horizon for these companies. Regardless, as the news can’t find enough room to report on all the layoffs occurring across the country, it was certainly encouraging to see these publishers communally celebrating their successes and the successes of the industry on the whole. 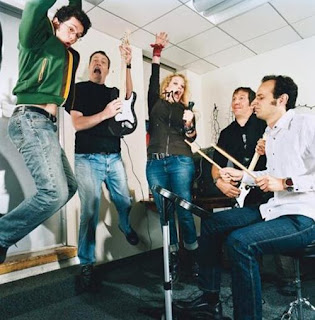 Secondly, and on a slightly more philisophical note, there was the exciting discussion that sparked from Hunziker’s story regarding the origins of the Rock Band game. Hunziker explained that Harmonix has been working in the music simulation genre for years, many of which were unfruitful financially prior to the outrageous success of titles like Guitar Hero and Rock Band. He explained that the company was comprised almost entirely of musicians when it was in its infancy, first planting the seeds that would eventually grow into their current mega hit. They worked with a goal in mind that, at the time, seemed somewhat ridiculous: they wanted to create a game that brought people together, in a room, experiencing something that, without this game, they might never have the opportunity to experience. Knowing that being in a band and performing provides a feeling like no other, and also well aware that not everybody can play an instrument, and even fewer people get to play in a band, Harmonix wanted to create a game that would not only simulate this experience, but maybe even inspire people to give the real thing a try. In fact, a recent study by instrument retailer juggernaut Guitar Center supports this notion saying that 67% of Guitar Hero/Rock Band gamers want real instruments.

It is very doubtful that the sales of actual guitars and drums have risen at the same astronomical pace as the sales of Guitar Hero and Rock Band, but there is no doubt that this communal sentiment has played an integral part in the rise in popularity. It was not long ago that gaming was considered escapist and anti-social, an activity relegated to dark basements and desolate living rooms, but with innovation from companies like Harmonix, and of course with the aid of the internet, this notion has been completely flipped on its head. Gaming now spans the population. A stat given by the moderator said that 97% of teenagers play video games on a regular basis. What percentage of them will stop gaming as technology only improves? What does this say about the future of the industry? Bright indeed. Hunziker shared an anecdotal story as well about a 70 year old woman he met on the T who told him how much she loved playing Rock Band. If games can speak to such a wide range of people, then it is a medium of art and entertainment that must be taken seriously and considered as a key aspect of our culture’s future.

Not only that, but maybe creating games such as Rock Band, or Wii Fit, or Dance Dance Revolution might encourage people to give the real world activities they depict a try. It could be argued that instead, this is giving people an easier, less enriching alternative to forming a band, learning an instrument, exercising outside or joining a dance team, but playing these games with friends is certainly better than not engaging in the activities at all and the aforementioned study supports the fact that people are making the jump from digital to real in sizable numbers.

Guitar Center executive VP and chief marketing officer Norman Hajjar is quoted saying “Most video games sell fantasy, but Guitar Hero and Rock Band are selling a dream that can be realized. These games plant an achievable goal in the heart of the player and that, in turn, drives our business.” Clearly this is not limited to music games and is something to be considered. (How this translates to violent video games and their real life impact is a whole different discussion).

When you boil it down, is playing video games, especially in the communal arenas that are now available, really more anti-social than going to the movies, shopping or going out to dinner? One could argue that multi-player gaming actually allows for more social benefits as the people you play with are often all working towards a common goal (not so different from team sports) and the internet allows for gamers to reach out to people that they could have never had contact with in a normal, social setting (people in other countries, age groups, occupations). And with more family friendly games popping up all the time, it is now common for families to actively unite in front of the TV much like they would over the dinner table.

As time progresses and more and more people buy into the video game world, it stands to reason that the stigmas attached to it will slowly fall to the wayside and it will become a mainstay in our culture.

All in all, the event was a great success and the wonderful people from Mass TLC were very intentional in letting everybody know that this was the first in what will be a series of video game industry focused events. If the quality of discussion and impressive turnout for the debut event are any indication, this will be a great series for a long time to come.