Want to Design a Superhero Exoskeleton? There’s an App for That!

Today, Concord, MA based SpaceClaim announced that their customers will soon be able to design using a Windows Touch enabled version of their 3D direct modeling software. What was once only a pipe dream plastered on the big screen during sci-fi (or SyFy?) blockbusters is now right around the corner thanks to the touch capabilities of the soon to be released Windows 7 software and a slew of amazing multi-touch screens from a wide variety of hardware providers. 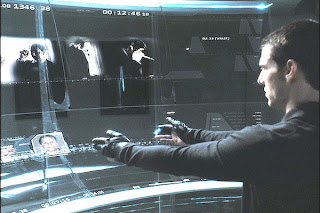 You may be thinking to yourself that you have been using touch screens for years as you played a solitaire arcade at a restaurant or a digital jukebox at a bar. What sets this software and hardware apart, however, is the ability to use multiple inputs to control your digital content. Whereas computers that allow you to swipe around images and music with one finger have been around for a while now, this new generation will allow you to use all five fingers, and even a stylus for additional accuracy, to perform more complex and potentially useful tasks (very similar to iPhone technology). Now instead of simply flipping through a digital photo album or pointing at an Ace of Spades, you can use a multi-touch screen to assemble and analyze complex 3D geometry, and of course circle lady bugs and play Guitar Hero.
What makes SpaceClaim’s product special, in light of the previous two examples of somewhat fluffy, albeit fun, uses of multi-touch, is that SpaceClaim is one of the only developers currently looking to utilize multi-touch for serious, enterprise software. When users get their hands on SpaceClaim’s multi-touch software they are going to have every ounce of design and analysis power that can be found in the currently available product. The multi-touch interface will allow for more streamlined design as well as more intuitive, and dare I say “fun”, collaborative interaction with fellow engineers and/or clients. Using their fingers to navigate and the stylus for precision, people will be able to explore 3D direct modeling in new and exciting ways as SpaceClaim paves the way for the future of developers on the Windows Touch platform.
And now for the kicker, see below SpaceClaim co-founder Blake Courter’s groove-infused multi-touch design demo to see exaclty what I’m talking about: