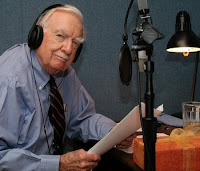 Along with the rainy and generally bad weather plaguing the nation recently, we have experienced quite a few deaths of famous personalities over the prior months. Musings of this current gloominess aside, we reflect on the life of Walter Cronkite, who was recently added to the list of passings in the entertainment world.

The TV journalist, who is perhaps best known for anchoring the first man on the moon, as well as the assassination of John F. Kennedy, passed away on July 21 at age 92 of cerebrovascular disease. I was at my mother’s house when we heard the news. As a flower child of the 1960’s, she experienced firsthand the contributions that Cronkite made to journalism and was visibly affected by the news of his death. As a young woman in my twenties, I was not fortunate enough to experience Cronkite’s work. What I do know, after watching numerous specials and tributes to Cronkite this past weekend, is that he reported on some of the most important events in our country’s history: the Kennedy era, Vietnam, Martin Luther King, Watergate, Apollo 11.
Watching several clips of Cronkite’s reports, I get chills just thinking of the world-altering events he guided our nation through. He interviewed President Kennedy, whose legacy I never experienced, but imagine it to be like that of our current leader, President Obama. He brought the news of America’s first man on the moon, gathering huddled crowds around black and white screens. He was involved in the Beatles’ first television debut on the CBS Evening News, which later went on to become one of the most famous bands in history. And he did it with an accuracy and integrity that journalists today still strive for. He not only reported the news, but showed vunerability and emotion while he did it, relating him to the rest of America. He choked up while reporting Kennedy’s assassination, news that had the rest of the nation in tears. It is said that no one in broadcast news will ever compare to Walter Cronkite. I only wish that I had been able to directly witness what he brought to American media. I guess that’s just the way it is …
To view clips of Cronkite’s work, visit CBS News for complete video coverage.