Uncategorized Posted May 7, 2009 by metropolis 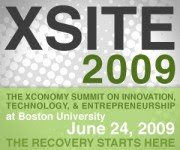 We knew that XSITE was being incubated, but now it’s been officially launched. Xconomy announced the event today, billing it as the Xconomy Summit on Innovation, Technology and Entrepreneurship.

This full-day conference will celebrate New England innovation and showcase the panorama of transformative efforts underway in the region in such fields as energy, life sciences, robotics, cloud and mobile computing, and transportation-at universities, startups, and large corporations.

Xconomy has partnered with Boston University’s Office of Technology Development for XSITE. The conference will be held on June 24, from 8 a.m. to 7 p.m. You can register here.

Here’s the lineup of heavy hitters: